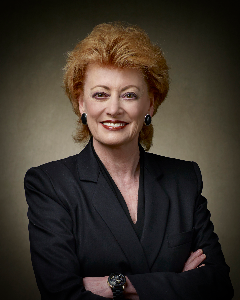 After graduating from Kansas State University in 1971, Jo founded her own successful interior design firm before merging in 1985 with Staffelbach in Dallas, Texas, where she joined as chief operating officer. In 1993 Jo was named president, and in 2006 she was named CEO. She is a Fellow of the International Interior Design Association and is extensively involved in the architecture and design community, currently serving as president of the Dallas Architectural Forum, on the Interior Design Advisory Board and the Dean's Advisory Council for the College of Architecture, Planning and Design at K-State, in addition to many other present and past roles.

Her esteemed industry profile has helped her achieve accolades as an Alumni Fellow and winner of the Entrepreneurial Award from the K-State College of Human Ecology. Under her leadership, Staffelbach has designed spaces for Fortune 100 companies and won countless design awards.