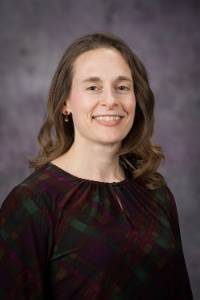 Katie Heinrich, professor in kinesiology, has been named president-elect for the American Academy of Health Behavior. The mission of the American Academy of Health Behavior™ is to serve as the “research home” for health behavior scholars committed to excellence and diversity in research to improve the public's health. She will serve as the 21st president for the Academy in 2021-22, and is the first faculty member from K-State to serve in the role.

Heinrich has provided extensive service to the Academy including serving as the Research Review Chair for the 2013 annual meeting, a poster judge, an awards council member since 2014, a member of three different ad hoc journal committees, and she has served on the Academy’s board of directors since 2014, holding the position of Chair of the Marketing andCommunications Council as well as Member Delegate. She has mentored two junior faculty members through the Academy’s Professional Development Research Scholars program, resulting in multiple peer-reviewed publications and external grant submissions. Heinrich is also a Fellow of the Academy in recognition of her external research funding of over $3.4 million, and over 50 data-based peer-reviewed publications.

An accomplished educator and researcher, Heinrich received a college Excellence in Research Award in 2018 and was recognized as Outstanding Graduate Faculty in 2019. She is the director of the Functional Intensity Training Laboratory (http://bit.ly/fitlab), providing mentoring in applied exercise behavior and obesity research. The FIT Lab also promotes education and service by providing opportunities for students, faculty, staff and community members toparticipate in exercise training through K-State CrossFit.  Heinrich is recognized nationally and internationally for her research on high intensity functional training (HIFT), exercise and chronic disease, and the built environment. Her research aims are to study the effects of HIFT on fitness, health and psychosocial outcomes delivered in a group-based context. She focuses on populations across the lifespan including youth, active duty military, healthy adults, overweight/obese adults, and cancer survivors.

The Academy is based on the belief that the future growth and evolution of the health behavior research rests on a strong commitment to conducting and disseminating quality research. With a critical eye toward the future, four stewards forged a new course for the field built on a distinctive set of conceptual underpinnings: A perceived need to establish a meritocracy that acknowledges the competitive nature of the research environment, challenges members to produce quality research, and recognizes outstanding research contributions; to advance evidence-based practice that is produced from practice-based evidence; the need to mentor new health behavior researchers; the desire to overcome partisan, protective agendas of traditional disciplines by stimulating multi-disciplinary research and learning; the Academy informs and educates scholars about the latest in research innovations and focuses on quality research through its professional meetings and publications.

The Academy was founded April 1, 1997 to transform the health promotion and health education field from a teaching- and service-centered profession to one with a stronger research foundation in which discovery would be valued as a means of improving practice and enhancing public health. The origination of the Academy was based on the belief that the future growth and evolution of the health promotion and health education fields rested on a strong commitment to conducting and disseminating quality research.

This article was posted on Tuesday, June 23, 2020, and is filed under College News, Kinesiology.