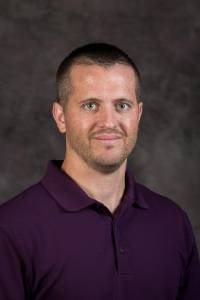 Steven Copp, associate professor in kinesiology, has been awarded the 2020 College of Health and Human Sciences Award for Faculty Research Excellence.

Copp’s research focuses on mechanoreflex control of blood pressure in cardiovascular diseases including heart failure and peripheral artery disease (PAD). “My work has focused on understanding how mechanical signals associated with skeletal muscle contraction are transduced into an autonomic nervous system reflex control signal and how that signal contributes to altered blood pressure control in heart failure and PAD patients,” said Copp. “If we are able to understand the mechanisms of exaggerated blood pressure increases during physical stress in cardiovascular disease patients then we, as a scientific community, can begin the important work of developing novel therapies to target those mechanisms and mitigate the cardiovascular risk in those patients.”

He has published nine original research manuscripts in prestigious physiology journals since 2016. In 2018, he received a four-year R01 grant from the National Institutes of Health worth ~$1.2 million which is allowing him to run experiments in the laboratory that investigate the mechanisms of mechanoreflex sensitization present in a rat model of heart failure.

Copp has also had his research recognized due to his cohesive team of graduate and undergraduate students. Six of his nine peer-reviewed manuscripts related to his central research theme have had a graduate student as first author. Current doctoral students in his laboratory, Korynne Rollins and Alec Butenas, have been awarded their own research grants from the National Institutes of Health and the Kansas Academy of Sciences. He has had at least one undergraduate student involved in his laboratory each semester since he arrived at K-State in 2016.

Through his nomination, kinesiology department head Craig Harms described Copp as a distinguished scholar with an international reputation whose scientific contributions rank in the very upper echelon within his field. “Though this award is focused on research, it is worth noting that Dr. Copp received the very competitive Kansas State University Commerce Bank award for Outstanding Teaching in 2019. We are extremely fortunate to have such a gifted researcher and educator.”

This article was posted on Friday, September 11, 2020, and is filed under College News, Faculty Research, Kinesiology.