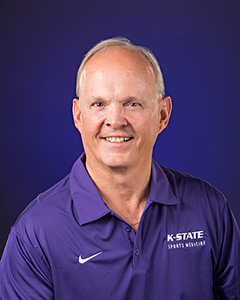 Athletics have always played a starring role in Keith A. Wright’s life. As a child, he could be found playing hard with friends on the playground and in backyards. When he got into school, Wright participated in football, basketball, baseball, track, gymnastics, wrestling, tennis and golf. An interest in medicine was piqued by both an uncle and brother who were physicians.

As a lifelong K-State fan, there was only one university for Wright to attend, so he walked onto the football team to play two season under Coach Vince Gibson. When a chronic back condition ended the football dreams, Wright focused on academics and earned a bachelor’s degree in pre-medicine in 1976. His next steps were a University of Kansas Medical School medical degree in 1979 followed by a three-year residency at Baptist Medical Center in Kansas City, Missouri, which exposed Wright to sports medicine.

Wright found a wife in registered nurse, Sue Ann Vest, and they moved to Bolivar, Missouri, to join other family physicians in the creation of the Bolivar Family Care Center. During this time, three children —Elizabeth, Amy and K.C. — joined the family. In 1991, Wright returned to Manhattan to become the medical director for Coach Bill Snyder’s football program’s medicine department. He also went into private practice with Manhattan Family Physicians and in 2000 began Stonecreek Family Physicians with fellow physicians.

In his voluntary role as K-State football’s team physician, Wright is also directly involved in educating K-State students about sports medicine. He has allowed students to obtain observation hours with him both at Stonecreek, as a general practitioner, and in the training room at K-State, treating athletes. At least once per year, Wright visits the classroom and provides didactic instruction on various sports medicine topics. He has worked side-by-side educating and instructing K-State athletic training staff and athletic training students on a daily basis as they all support the Cats.

Wright’s involvement in the community isn’t limited to giving back to K-State students, as he is a senior aviation medical examiner for the FAA, medical director for Manhattan’s Homecare and Hospice, keyboardist in the Manhattan Barefoot Dixieland Band, First United Methodist Church choir member and Colbert Hills’ Champions Club member. Wright and his wife also enjoy when the kids come home with their spouses to cheer on the Wildcats.