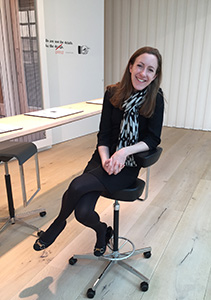 Upon graduation from K-State’s interior design program in 2008, Haley Van Wagenen began working at Skidmore, Owings & Merrill, SOM, in Washington, D.C., where she gained experience with large projects in the government sector. An interest in history and a desire to promote sustainability took her to the University of Pennsylvania, where she earned a master's degree in historic preservation and a certificate in ecological architecture. Van Wagenen’s thesis work focused on using building information modeling to create living models of historic buildings to aid in renovations and reuse. As a full-time student in Philadelphia, she worked part time for SOM New York, splitting time between the two cities for work and studies. After earning her master’s, she joined the New York office full time, and began to focus on global corporate headquarters for financial institutions and technology companies.

Van Wagenen has recently joined SOM’s London office, where she leads interior design initiatives on projects in Europe. She travels weekly to Geneva, Switzerland, where she serves as the on-site client contact for one of the major international organizations headquartered there. The 2.2 million square foot project involves renovation of a historic building and the design of a new office building on the campus.

Van Wagenen is a certified interior designer in the State of New York, holds an NCIDQ certificate and has earned the USGBC’s LEED AP BD+C credential. She takes time to give back to K-State through video conferencing with interior design classes and hosting design study tour students at SOM’s London office.

College of Health
and Human Sciences