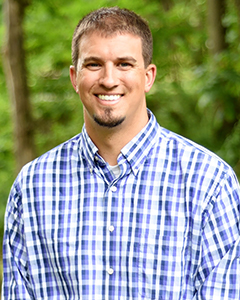 Josh Mathiasmeier, RD, received his Kinesiology and Nutrition degrees in 2011 and his Dietetic degree in 2012 from K-State. A Division I track and field athlete, Mathiasmeier developed his interests in health and wellness his freshman year of college. After completing his undergraduate degrees, Mathiasmeier completed the Coordinated Program in Dietetics in 2012.

After serving two years with the Kansas State Department of Education, Mathiasmeier pursued his career goals of being a Foodservice Director where he could work directly with people and resources. In 2014, Mathiasmeier took the Director of Nutritional Services position with Kansas Public Schools, USD 500. Since becoming Director, Mathiasmeier has increased the number of meals served to 32,000 daily by using innovative techniques to expand the breakfast and afterschool meal programs. He has also increased the food quality and customer satisfaction. Under his direction, USD 500 has been able to offer meals free of charge to all elementary and middle school children.

Mathiasmeier remains connected to his alma mater by proctoring Dietetic students, serving on the Human Ecology Dietetics Advisory Board and sharing the “Little Apple” with his twin sons, Jackson Joshua and Harrison Joshua.