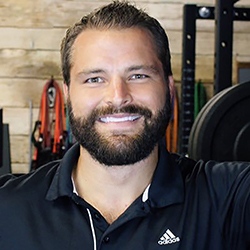 Brett Bartholomew – Founder of Art of Coaching™, is a performance coach, author of the best-selling book Conscious Coaching, and globally recognized Keynote Speaker. The principles in his book and courses have been applied to and adopted by world-class athletes, members of the United States Special Forces, Fortune 500 companies, non-profit organizations, and Universities nationwide. His experience includes working with collegiate teams, professional teams, members of the United States Special Forces, professional fighters within the UFC and boxing, as well as several Fortune 500 businesses. Taken together, Brett has coached a diverse range of athletes from across 23 sports at levels ranging from youth to Olympians and Super Bowl champions. His coaching and speaking has spanned the globe, from China to Brazil and numerous stops in between.

As an entrepreneur, Brett has proudly served as a teammate and supporting partner in the strategic growth of two separate performance companies and is a highly sought-after consultant and mentor for many others across the United States and abroad. Additionally, his work and expertise has been featured in numerous local and national media outlets.

His book, "Conscious Coaching: The Art and Science of Building Buy-In", achieved best seller status in the categories of sports coaching" (#1), business and money (#8) and was ranked in the Amazon top 100 books overall.

Brett is a member of the National Strength and Conditioning Association (NSCA) where he holds both their CSCS*D and RSCC*D distinctions. He is a proud graduate of Kansas State University, where he obtained a Bachelor of Science degree in kinesiology, and Southern Illinois University-Carbondale, where he obtained a Master of Science in education in exercise science with an emphasis on motor behavior, cueing and attentional focus in human performance.