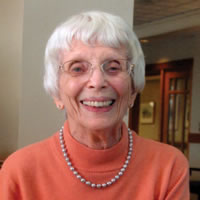 Ruth Wells graduated in 1943 with a bachelor's degree in vocational home economics from Central Missouri University in Warrensburg, Mo. Following graduation, she joined the U.S. Marine Corps Women's Reserve and served her country during World War II. She was first stationed at Camp Lejeune, N.C., for boot camp, then moved to the Marine Corps Air Station near Santa Barbara, Calif., and, lastly, Oahu, Hawaii.

Wells continued her education at Kansas State University, receiving her master's degree in nutrition in 1948. Wells also completed courses at Columbia University in New York, University of Wisconsin and University of Arizona.

After receiving her master's degree, Wells taught vocational home economics at the high school level in Archie, Mo. In 1952, she joined the extension service at K-State as a home economist in Neosho and Jefferson counties. Afterwards, Wells lived in Manhattan, but spent the majority of her time traveling in southeast, and then southwest, Kansas as the district agent. She was also the nutrition specialist for the state. In the last 10 years of her professional career, Wells brought the Expanded Foods and Nutrition Education Program to Kansas. Operating in 21 counties, she wrote the training and teaching materials for county extension agents, paraprofessionals and the public. The program, which continues to this day, helps participants with very limited resources acquire the knowledge, skills and changed behaviors necessary to feed their families a more healthful diet.

Wells is a life member of Epsilon Sigma Phi, a professional organization for extension, and the Kansas and American Home Economics Association (KHEA/KAFCS). She is also a world traveler. During her most recent excursion in January 2011, Wells traveled to Peru and hiked the Amazon Rain Forest. Following retirement in 1980, she volunteered with Homecare and Hospice in Manhattan and continues in the program.