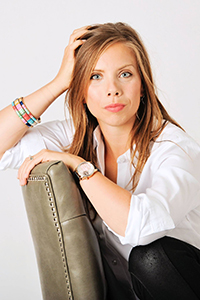 Caroline Zoe Schumm is a designer and social entrepreneur. She is the founder of the fair trade apparel brand "4 All Humanity," which has empowered hundreds of workers worldwide and aids in providing education for girls in Guatemala.

In 2014, Schumm focused her work to be solely in Guatemala to maximize the impact for the artisans and their families. Today, 4 All Humanity works directly with more than 30 artisan families in Guatemala, providing them with good working conditions and fair wages, which allow the artisans to pull themselves out of poverty while providing education and hope to their families.

Originally from Hutchinson, Kansas, Schumm attended K-State majoring in apparel and textile design and apparel marketing with a minor in business. While at K-State, she was named an outstanding senior in her field, won a national design competition, and she also won various regional design competitions. In college, Schumm studied the effects that mainstream fashion manufacturing had in countries where it was produced, including the prevalence of child labor, very low wages, inhumane working conditions and environmental pollution.

Zoe has worked in the commercial fashion industry as a technical designer and designer, most recently serving in the role of sales and development manager for a local nonprofit in the Hutchinson area.

Zoe has won regional and national awards, been featured in national magazines, and regularly speaks about her journey from fashion designer to social entrepreneur. Zoe is a wife, mother, foster mother and advocate for those who cannot advocate for themselves.