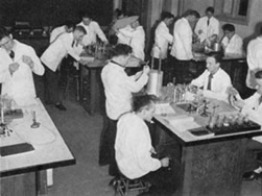 The Department of Kinesiology has a long tradition at Kansas State University. The first mention of the study and promotion of physical activity can be traced back to 1863 when students enrolled in Kansas State Agricultural College were "put through inhalations and exhalations of air from the lungs." In the early 1920's the department offered a few coaching classes along with basic physical activity classes. The department in 1926 introduced a four-year professional curriculum for the training of physical education teachers. The basic program of activities expanded and eventually every undergraduate student enrolled in the university completed two years of courses in the basic physical activities program. Separate male and female physical education departments existed until the fall of 1972 when the two units combined and all programs became co-educational. During the 1980's the department experienced considerable programmatic change involving the movement in and out of the department of several smaller professional units (health, recreation, dance, and athletic training). The department name changed several times during these years to reflect the program changes. Kinesiology was adopted in 1992, focusing on the study and application of physical activity for optimal health. We currently have over 600 undergraduate students majoring in kinesiology - the scientific study of physical activity. This is more majors than at any time during the history of the department. The names of the department heads over the past 90 years as well as the programmatic and name changes during this time are listed below in chronological order. We are confident that we have the faculty and curriculum to prepare students to enter a wide variety of careers related to our mission (the study and promotion of exercise, fitness, and health) and to be successful and productive members of our society as we move into the 21st century.

A listing of the programmatic and department name changes follows

1926-46 - B.S. in Physical Education and Training initiated with first graduates anticipated in 1929

1946-50 - Department of Physical Education and Athletics

1950-52 - Department of Physical Education and Athletics

Dance moved to Dept of Speech Communication, Theatre, and Dance in 1987 and remains there today.

Dual degree (B.S.) in Nutrition and Exercise Sciences established in 1986.

1992-2013 - Department of Kinesiology, College of Arts and Sciences

Athletic Training moved to the Department of Secondary Education, College of Education in 1995 and is now in the Dept of Food, Nutrition, Dietetics and Health in the College of Health and Human Sciences.

2013-present - Department of Kinesiology, College of Health and Human Sciences

A listing of the department or unit heads follows: