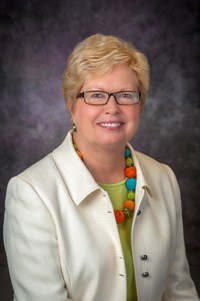 Virginia Moxley is professor and co-director of the Institute for Academic Alliances. In June 2013 she retired as dean of the College of Human Ecology at Kansas State University and entered phased retirement. Prior to becoming dean in 2006, Moxley served as associate dean of the college. She came to K-State from Emporia State University where she was a professor and head of the Department of Sociology, Family Sciences and Anthropology.

Moxley's work with the Great Plains IDEA supported the development of the Great Plains IDEA Model for multi-institutional academic programs which has been replicated by other higher education academic alliances. Moxley co-administers K-State's Institute for Academic Alliances that provides consultation and management support for higher education alliances nation-wide.

Prior to the publication of the 2000 Classification of Instructional Programs by the National Center for Educational Statistics, Moxley led a team of representatives from six professional associations and two federal agencies to implement a major redefinition of the fields of study within the human sciences - the first major correction in four decades.

Additionally, Moxley has served as past national president of Omicron Nu Honor Society (now Kappa Omicron Nu Honor Society), co-founded the Undergraduate Research Community for the Human Sciences, and helped establish a Human Sciences program at the National University of Paraguay. She currently serves on the Advisory Panel for the Food and Agriculture Education Information System. Moxley was honored by the Association of Public and Land Grant Universities Board on Human Sciences as the recipient of the 2009 Public Service Award.

Moxley holds a B.S. in Textile Science, an M.S. in Family Counseling, and a Ph.D. in Education, all from Kansas State University.